Posted on November 3, 2009 by alistair.lattimore 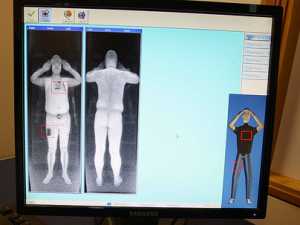 Airports around the world may soon be upgrading their existing metal detectors and shelving the manual pat downs or friskings for a new machine which is hoping to revolutionise airport security checkpoints.

RapiScan Systems of Torrence California created the new T-ray full body personal screening scanners, which have been undergoing a six month trial at Kelowna International Airport in British Columbia. With the successful test run at Kelowna International Airport, they are now looking to roll the security device out to larger airports throughout Canada.

The new scanner is strong enough to see through clothes and highlights hidden or concealed items but is approximately 1/20000 the strength of a traditional medical x-ray machine. The results of a ‘T-ray’ airport scanner produces a ghostly type figure without any distinguishing marks of the recipient, clearly identifying concealed items but also highlighting body features such as breasts and genitals.

This type of security measure at an airport is intended to be a secondary line of defense, where a person can choose between a manual frisk or the T-ray security scanner. The majority of people questioned about the use of the scanner during the trial period at Kelowna International Airport said they preferred the scanner as it didn’t require someone to pat them down, which a lot of people consider to be a considerable invasion of personal space and privacy.

Australian airports are now beginning to run trials with the full body scanners, starting with Melbourne Airport, Sydney and Adelaide domestic terminals. George Brenan, the acting director for the Office of Airport Security in Australia has stated that the outcome of the tests at the three Australian airports will determine if the technology would replace existing screening systems, be used a secondary measure or not implemented at all.

This entry was posted in News. Bookmark the permalink.